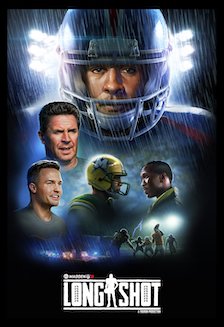 > Managed budget and resources over a 22-month development cycle for Madden NFL 18 Longshot.

> Helped create cinematic technology, workflows and pipelines for a studio that had never created cinematics before. This included developing an editorial workflow later adopted by other EA narrative teams.

> Won Polygon’s “Sports Game Of The Year” Award and a WGA nomination in Narrative Games.

Madden 18 Longshot was co-written by high school best friends Mike Young and Adrian Todd Zuniga. Mike was also the creator and director.  It won Polygon’s “Sports Game Of The Year” Award and a WGA nomination in Narrative Games.

To develop Longshot, EA Sports used motion capture on the actors. Devin is portrayed by JR Lemon, a former Stanford Cardinal football player and member of the Oakland Raiders, while Academy Award winner Mahershala Ali plays Devin’s father Cutter. Colt is played by Scott Porter, a cast member in the TV series Friday Night Lights and ex-high school football player. Ross and Julia are portrayed by Ricky Wayne and Marem Hassler, respectively. Rus Blackwell plays Jack;  Bill Cowher, along with former players like Dan Marino, Chad Johnson, and Larry English are also involved in the story. United States Army soldier and former Texas Longhorns long snapper Nate Boyer appears in the story as Captain McCarthy.  Like Boyer, Devin is a Texas Longhorn and soldier, which Boyer pointed out was a coincidence; an ESPN documentary about the long snapper was also named The Long Shot.

Unlike other characters, Jim Miller and Pat Kirwan appear in the game as live action analysts for the fictional Real Football show, as do players Kirk Cousins and Josh Norman in Twitter videos.

A piece Microsoft's Daily Show did for the debut at E3.

A behind the scenes look at how the cinematics come together.

A cross section of scenes from storyboard to completion.

A behind the scenes at the incredible score for the project.