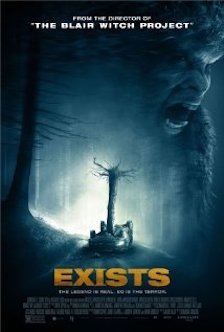 > Developed the creative and raised $2.5M in private equity

> Delivered the film to Lionsgate.  Helped create the marketing campaign.

Robin Cowie produced the movie Exists created by his partners Haxan Films which was the culmination of a Bigfoot obsession inside Haxan for many years.  They developed several Bigfoot scripts, some with fairly large budgets.

Frustrated by the amount of time it was taking to develop these projects, they ultimately decided to revisit the first person experience and made Exists in a very short 9 months.

The physical effects were challenging and the location demanding due to wildlife, temperature and insects and their producing skills were maxed out as they tried to create a lot on screen with limited resources. It was distributed by Lionsgate Entertainment.

Exists is a 2014 American found footage monster horror film, directed by Eduardo Sánchez. The film had its world premiere on March 7, 2014 at South by Southwest and stars Chris Osborn and Samuel Davis.

The story revolves around a group of friends hunted by something in the woods of East Texas.  The film was written by Jamie Nash.