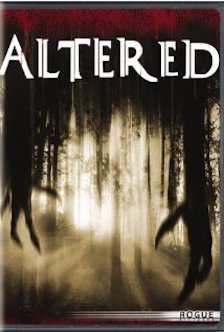 > Developed the creative and raised the private equity

Altered is a 2006 science fiction horror film directed by Eduardo Sánchez and written by Jamie Nash.

It was Ed’s first solo work as director following his co-directing of The Blair Witch Project in 1999.

The plot is an inversion of the standard alien abduction formula, as four men abduct a lone alien, planning to wreak revenge on the invading species. In its early stages, the film was entitled Probed, and was intended as a comic homage to work of Sam Raimi.

Critical reception for Altered was mixed; Cinema Crazed gave the film a positive review, praising the “good old fashioned special effects mixed with wicked gore”, while Reel Film was more ambivalent, suggesting that the film was “a little too talky for its own good, [but] practically a horror masterpiece when compared to some of its straight-to-video brethren.”

At the end of the day Altered was another life changing experience for Altered producer Robin Cowie.  It was profitable for our investors.  They filmed it at Universal Studios in Orlando and were able to put many of their friends to work again.

There are lifelong friendships that came out of creating this film.  Altered producer Robin Cowie is still very close with many of the talented actors: