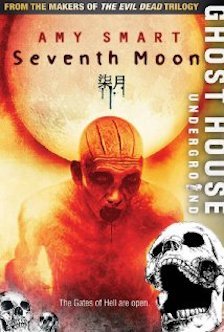 Spirit demons in rural China.  The challenges were endless!

> Seventh Moon producer Robin Cowie helped raise the funds, even mortgaging his house so they would not lose their start date!

> Sold it to Lionsgate and Ghost House,

Seventh Moon is a 2008 American horror film written by Eduardo Sánchez and Jamie Nash, and directed by Eduardo Sánchez. Part of Robert Tapert’s Ghost House Underground series.  The film is based on the Chinese legend that on the full moon of the seventh lunar month, the gates of hell open and the dead can enter the realm of the living.

It stars Amy Smart as an American woman who’s spending her honeymoon in China with her newlywed Chinese-American husband, and while driving through the countryside the couple gets stranded and has to find a way to survive the fateful night.

Seventh Moon producer Robin Cowie along with his partners, Haxan Films filmed in the New Territories on the edge of Hong Kong.  This project presented a number of difficult producing challenges, working in China was not easy and they constantly had to adapt. But it was successfully distributed by Ghost House Underground despite being in the midst of the financial recession.